Hiking the Via Egnatia Route 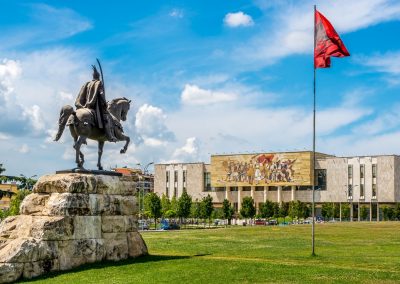 Let us take to explore two countries in one adventure during hiking along the Via Egnatia route. This trans-border tour includes the historical legacy of the most famous Roman Road in Eastern Europe – Via Egnatia, stretching on the territory of North Macedonia and Albania. The visitors of this tour will experience the local tradition and understand the broader (social, economic and historical) context of the Balkans destination. Hiking and light engagement in physical activity is included.

The key attractiveness factor of the tour is the well-known Via Egnatia road, built around the 2nd century BC by the Roman Empire. It was initially a military road and later the main spatial, economic and cultural connection between Rome and Constantinople. It is a 1.000 miles long route which has the most perfectly preserved remnants in North Macedonia and Albania. Along the trail, still, there are existing local communities that can authentically demonstrate their lifestyle, cultural values and tradition.

The focus is on the natural legacy and local (rural) traditions and customs. Via Egnatia passes in some highly protected areas such as National Park Pelister and Ohrid (Struga), protected by UNESCO. In at least four points, guests will see actual leftovers of the Via Egnatia route, some from the early Roman times and some from the Byzantine or Ottoman period. 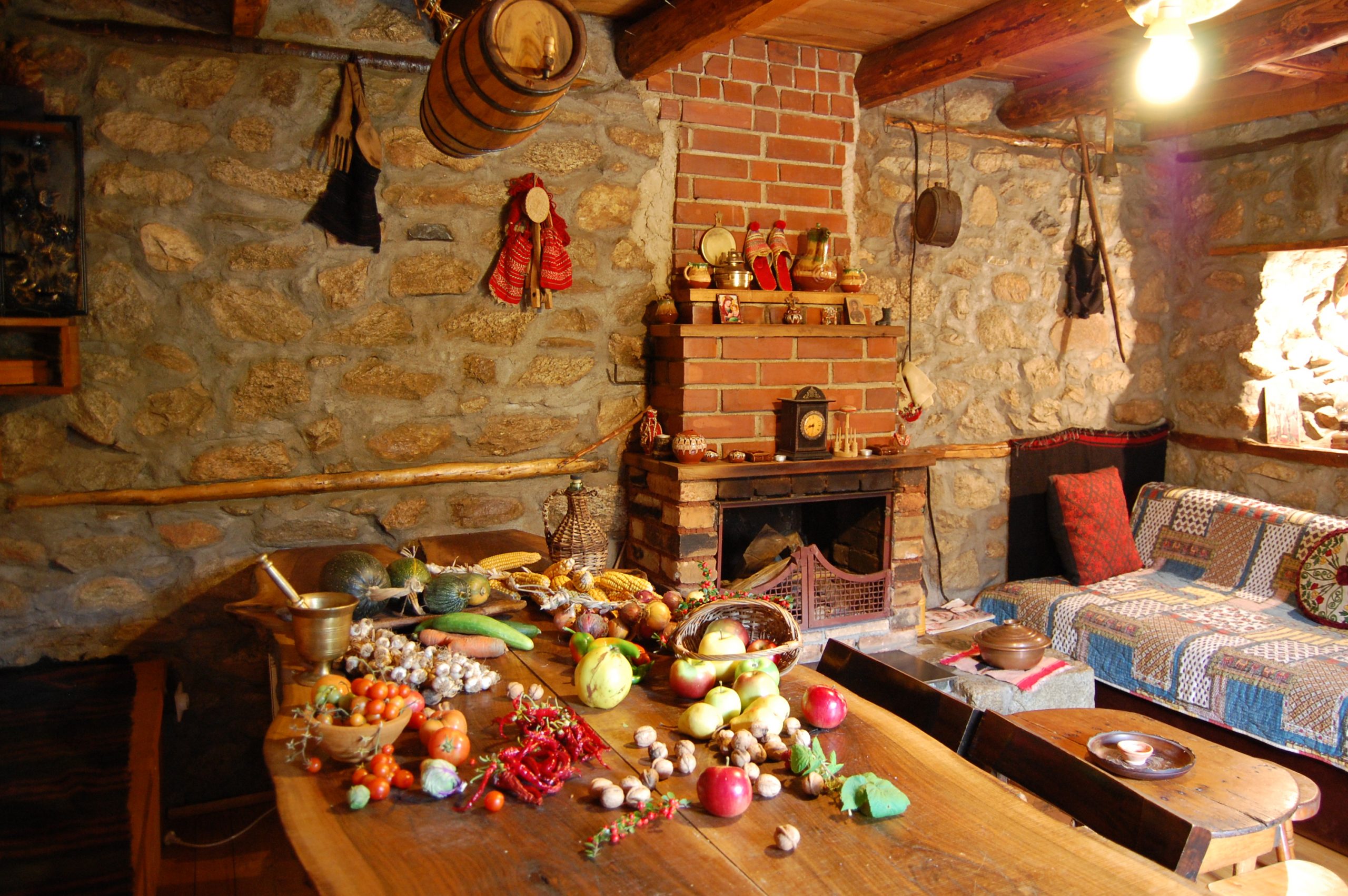 Day 3 - Visit of Durres (Gate of Via Egnatia)

Durres is a versatile port city with both a modern and ancient appeal. If fun in the sun is in order look no further than the waterfront, where Albania’s largest and liveliest beach buzzes with activity in summer. Durres is also replete with Roman and Byzantine heritage – you can discover the remnants of Albania’s biggest amphitheater here, while both the city defenses and forum date back 1500 years. Hike on Via Egnatia outside the urban area of the city. An unforgettable journey into nature and history of the Balkans. Overnight Tirana.

Hike on Via Egnatia in the middle parts of Albania. Through mountains and valleys, along riverbeds, past lakes and seaside, villages and cities, the ancient Via Egnatia route goes 1000 km eastward to Istanbul. Parts of the old road have survived and are still there to enjoy for the observant hiker. Visit of Elbasan and Ancient tombs in Selce e Posthme. Traditional lunch in rural area in Albania. OVERNIGHT in Ohrid.

The day starts in Ohrid. In the “Jerusalem of the Balkans” we start with the most rewarding city tour and visit just a few of more than 300 churches, fortresses, ancient sites, museums, and UNESCO protected monuments of nature. Visit the first Slavic University, Cyrillic alphabet, dawn of Christianity in Europe, ancient kingdoms, and the heritage of the 19th century era of Romanticism. Hiking in NP Galicica. Hiking through Galichica is beautiful, because from the National Park Galicica stretch the stunning views of the Ohrid Lake and Prespa Lake. It is especially attractive for visitors to observe the two beautiful lakes at the same time.

Day 6 - Visit of Struga and Radozda

Hike/donkey ride along VE route in western parts of Macedonia. Struga is a place where natural beauty meets centuries old tradition, and where you can experience a very diverse cultural offer, combined with relaxing beaches and traditional Macedonian cuisine. Visit village Radozda. This beautiful village with a long history and a rich spiritual life is both created for pleasant moments and for complete comfort. Central is the village church of St. Nikola, which was built in the 18th century. Other churches are: the oldest cave church St. Arangel Mihail, which is from the 14th century and the newer St. Petka, St. Nedela, St. Ilija and St. Bogorodica. Another very important landmark is the preserved part of the Via Egnatia-winter route .Traditional lake menu lunch in rural facility. Overnight Ohrid.

Hike along VE in southern parts in Macedonia (NP Pelister). Fantastic and inspiring prehistoric pine forest, many footpaths and trails for different level of hikers. Visit of Kasta Nikea – Via Egnatia actual remnants. Culinary class, rural lunch in Village Dihovo, organic honey tasting and api-therapy. Villa Dihovo is a friendly, family-run guesthouse serving homemade traditional food and drink, and offering plenty of outdoor activities for those wishing to explore the forested mountains, lakes and river immediately accessible from the village. Overnight in Bitola.

Visit the Saint of Calcutta Museum – at the very same please where she was born! Mother Teresa was Albanian born in Skopje just opposite our hotel; today there is a museum exhibiting her personal things among other, a place visited by the Pope Francis in 2018 as well.

Visit the Stone Bridge, Medieval Fortress Kale. The tour will also include the Old city Bazaar for close exploration of the everyday life of different ethnics thru coffee or tea break and mingling with the locals. 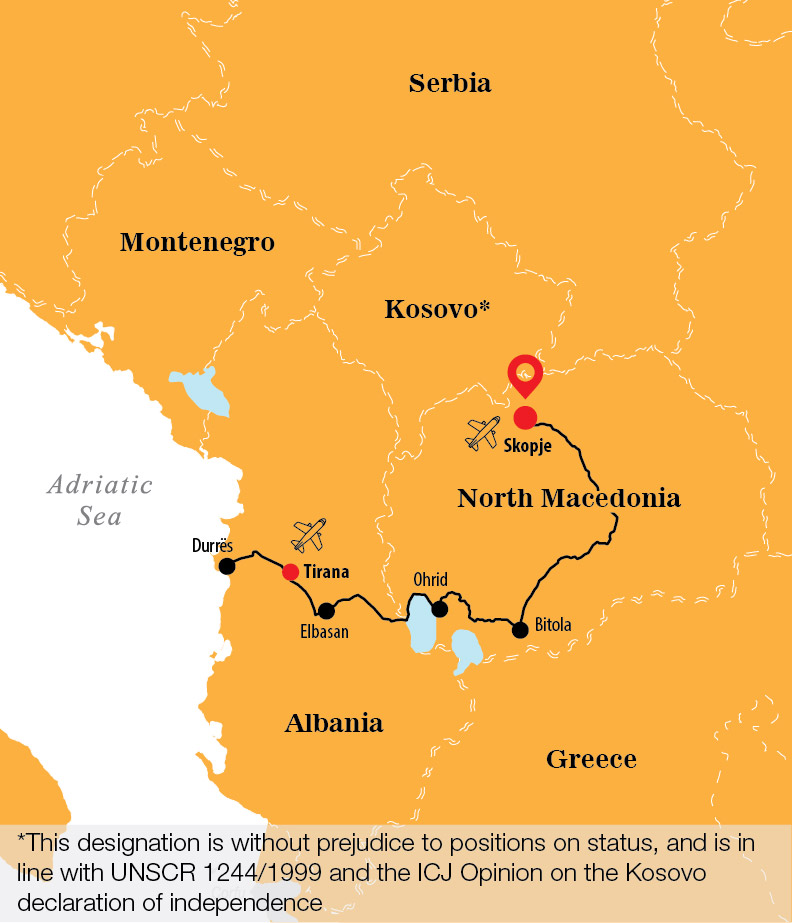